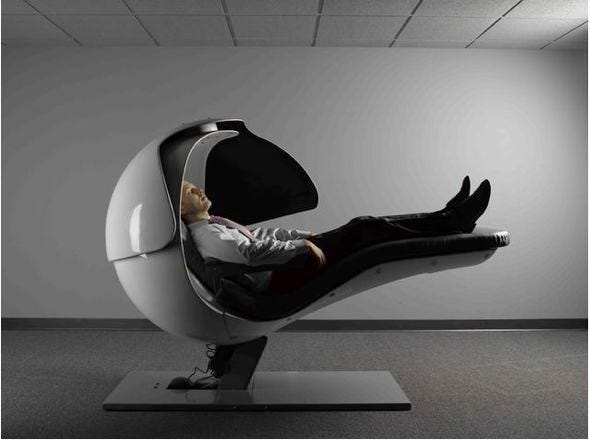 Nap or Nay - Time to Sleep On The Job (with an Ostrich Pillow)!

“Back when I worked for a Bank in Southeast Asia, I was a big fan of the power nap. The days were long, and I was frequently fatigued by the afternoon. Because the siësta was so stigmatized, I often took a 15-minute nap in the bathroom, well, on the toilet seat, to be exact.  I frequently went back to work feeling a boost even coffee couldn’t give me – I was refreshed and ready to go for the rest of the day.

Looking back, I am grateful that the office bathroom was somewhat odor-free, but I wish my company had adopted a nap culture. It would have been more sanitary to sleep on my desk!” – Shleepie in Singapore

The Power of the Nap

The Power Nap is a topic that has been discussed and researched consistently over the years. It is actually a scientifically proven fact - A study Sara C. Mednick et al. published in Nature Neuroscience found that the participants’ performances on tests deteriorated throughout the day. A 30-minute nap between tests, however, stopped the decrease in performance, and those who took a 60-minute nap reversed the decline.

Performance aside, other studies have shown that naps not only improve your feeling of sleepiness, they boost your mood, enhance learning and memory, and banish stress.

Really great benefits, right? And workplaces are beginning to recognize them. AOL-Huffington Post and Google for example, have installed in-office nap rooms.

Nap - At the Workplace

And yet, it is not widely accepted to knock out in the break room. Sleeping on the job is one of those things that we turn our noses up on. If someone naps at 2:30pm instead of answering emails like the rest of us, surely it must mean they are slacking!

It is thus important a top-down approach is taken to achieve this cultural change. The BBC reported that Nats, UK’s national air traffic control service, requires their staff to take a “30-minute responsibility free break at least every two hours; a retreat to the café or a short nap perhaps”. In Japan, Nishikawa Living implemented a 15-minute naptime after lunch break.

- Nap around 2pm-3pm (that’s right, exactly at the time you have that famous afternoon dip)

- Create a restful environment, like what our CEO, Dr. Els van der Helm, does

If you’re wondering now if the Office Power Nap could work for you more than, say, the time you spend running out to get coffee, it’s time to put it to the test! Share your thoughts with us afterwards on Twitter or LinkedIn using #thenappingshleep and stand out to win an Ostrich Pillow!